Blog
You are here: Home1 / Blog2 / News3 / Astronomy Picture of the Day

For a new kind of visual stimulation, research images from the NASA supported app APOD (Astronomy Picture of the Day), as inspired by this Hummingbird activity session:
Many wonderful comments and discussions were made that stimulated Bonny cognitively and emotionally, but one image struck her in a particularly strongly manner. When it appeared, Bonny requested, “Let me just look at this one a minute… Look at the colors.That is so beautiful!” We researched into why the sky would look the way that it did and Bonny remarked, “I think that is the most beautiful one I have ever seen…. It is just perfect!” She admired the photographer’s skills and thanked them out loud.
Bonny’s sense of humor came out as she declared an image of a nebula to be human-like and named it “Mr. Nebula”. Her laughter increased as she decided he was more like a superhero and changed his name to “Captain Nebula.” 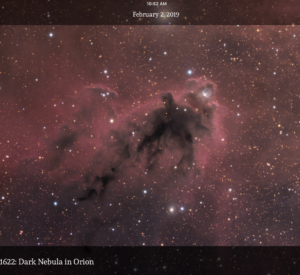